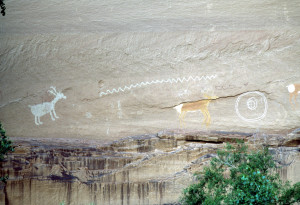 The styles of Native American rock art are determined mainly by the time period when they were created, as well as overarching thematic and compositional elements. The colors used in Native American rock art were determined mainly by what was available in the region. Hematite was used for red paints, limonite for yellow shades, kaolin clay for white shades, and charcoal for black shades.

The oldest and most complex of all Native American rock art is known as Pecos River rock art. This type is found covering cave walls. It is elaborate and utilized many colors. Red Linear style is younger and very different from Pecos River. It involves a great deal more straight lines and the more “stick-like” images of people and animals. It also known for its decline in color. This style is distinguished still from the youngest style of Native American rock art, the Red Monochrome style. It features only red and much bolder, thick lines, but a return to increased complexity.

Native American rock art served a number of utilitarian purposes. The sites were used to record not only tribal history, but also religious beliefs. Some examples document ceremonial practices, while others serve as maps to hunting grounds and other important locations. A lot of what we know about Native Americans has come from this art.