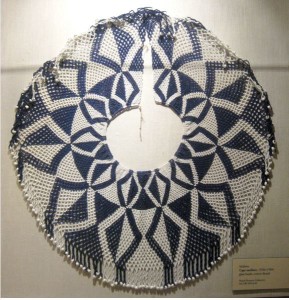 Certain traditional Native American Art forms, such as basket weaving, served both artistic and practical purposes. The women would spend many hours weaving together these intricately detailed Native American art baskets, which would then also be used for transportation needs. This ancient Native American art practice has been dated back to almost 8000 years ago. These woven baskets are often very colorful with complicated designs on them.

Aside from adding colorful and decorative detail to clothing and other items, beadwork holds significant important within Native American communities. In addition to its aesthetic beauty, this Native American art form was used as a way of identification within groups. Although a Native American art form amongst some tribes, beadwork was also used as a form of currency. Beadwork also plays an important role in many life ceremonies and rituals, such as marriages, funerals and births. Special beaded items are used as adornment for these celebratory occasions.

Another popular type of Native American art is dreamcatchers. Traditionally, dreamcatchers are formed from willow. The will is bent into a circular shape, and then wrapped with animal sinew which forms a web similar to a spider’s web. Dreamcatchers were hung over a child’s bed in order to prevent or “catch” bad dreams.